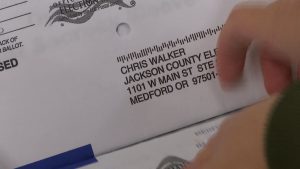 ASHLAND, Or.- Over the weekend, an Oregon student group launched a final push to get the youth vote out ahead of election day.

OSPIRG’s New Voters Project is a student-led voter mobilization group that encourages college students to get registered and vote early.

Over the weekend, the organization held a virtual tele-thon to help walk young voters through the final steps of getting ready to vote. OSPIRG works from early in the fall to make sure students on campuses across the nation are registered and prepared.

“In 2016 about thirty percent of SOU students who were registered actually didn’t end up voting so I’m excited to not only see the numbers at SOU and in Oregon increase, but all across the country,” Szabo said.

The organization hopes to stay active and present on campus beyond this presidential election. OSBRIG has branches on campuses across the state, including University of Oregon, Lane Community College, and Southern Oregon University.