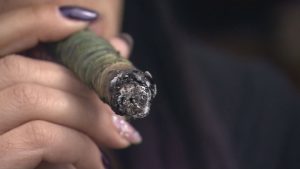 (CNN) – There’s a new study out suggesting that more pregnant women appear to be using marijuana, sometimes to soothe anxiety and morning sickness.

The study published Tuesday in the Journal of the American Medical Association observed a sample of pregnant women in California.

One expert speculates that the rise might be partially explained by the increased availability of legal marijuana in recent years.

According to the CDC, doctors caution that marijuana’s effects on a fetus aren’t clear, but could include low birth weight and developmental problems.