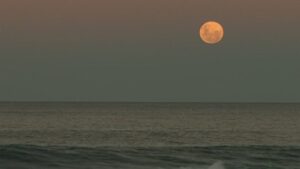 (NBC) Earth’s shadow crept across the moon overnight in a cosmic event known as a super blood moon.

People were able to see a total lunar eclipse around the Pacific Rim from Australia to Asia to the Americas. Night owls in Hawaii and the western U.S. and Canada also could see it in the early morning hours.

A lunar eclipse takes place when the moon, Earth and sun line up and earth’s shadow moves across the moon. As the eclipse progresses the moon almost disappears as it did in Chile overnight.

For about 15 minutes, as the moon moves fully into Earth’s shadow, the moon appeared to turn red.

A super blood moon is when a full lunar eclipse coincides with a super moon. That’s when the moon gets unusually close to Earth and appears brighter than normal. “Close” is relative,  the moon is still more than 220,000 miles away at its fullest.