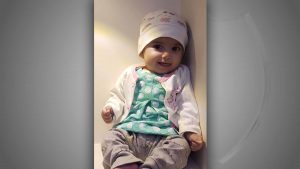 Portland, Ore. — NBC News Channel/KGW) — A 4-month-old girl from Iran who arrived in Oregon earlier this month to receive treatment for a rare heart condition is now out of surgery.

It was an all-day affair on Friday for doctors at OHSU to complete a heart surgery to save 4-month-old Fatemah Reshad’s life.

Her uncle, Sam Taghizadah said he and his family are grateful for all the help they’ve received from doctors and the community. “I should say thank you forever to you, help us and i am so happy and I’m proud I’m in the U.S. and helpful people and especially the Oregonian people.”

Fatemeh was born with holes in her heart, and her two major arteries–the aorta and pulmonary were switched. But the roughly day-long surgery fixed all that.

The visa for little Fatemeh and her family was canceled after President Trump signed an executive order banning people coming from 7 predominantly Muslim countries.

About a week after the ban was announced, the federal government granted the Reshads a waiver.