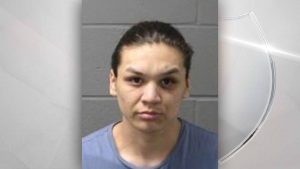 KLAMATH FALLS, Ore. – A man who allegedly stabbed a victim after breaking into a Klamath Falls home was arrested Wednesday.

The Klamath Falls Police Department said just before 4:30 a.m. on September 11, Rayven Tequoi Lotches gathered flammable material outside a home in the 1800 block of Sargent Street. He put the material up against the side of the residence in an apparent arson attempt, however, he was reportedly not able to light it on fire.

Instead, Lotches allegedly removed a screen, opened a closed window and entered the male victim’s residence. He then stabbed the victim multiple times before leaving the home, police said.

There was no indication Lotches knew the victim.

About two hours after the stabbing, officers were called again to the area after a resident saw a man trying to break into vehicles. A short time later, officers found the man, who was identified as Lotches. Police said he appeared to be delusional and under the influence of methamphetamine.

Lotches was arrested without further incident and hospitalized before being taken to the Klamath County Jail. He remains behind bars on numerous charges including attempted murder, robbery, burglary, assault, and attempted arson.