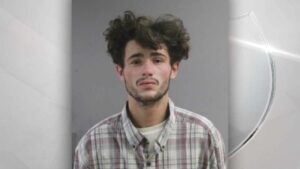 MEDFORD, Ore. – A suspect was arrested for allegedly setting a man on fire.

The Medford Police Department said on the afternoon of September 15, a 54-year-old man was sleeping in an alley in the 100 block of South Grape Street. At about 4:00 p.m., a stranger approached the man and lit the bottom of his blanket on fire, which spread to the victim’s clothing. While the victim was able to put the fire out, he sustained third-degree burns on his hands on feet.

The incident was caught on a surveillance camera, according to MPD. The video reportedly shows the suspect walking up to the victim, intentionally lighting the blanket on fire, and watching as the flames grew before walking away.

The next day, an officer saw a man matching the description of the suspect at Hawthorne Park. Investigators later confirmed the man was the same person caught on video lighting the fire. He was identified as 22-year-old transient Brandon Nathaniel Lyon.

According to MPD, Lyon was lodged in the Jackson County Jail for attempted murder, assault, and arson.