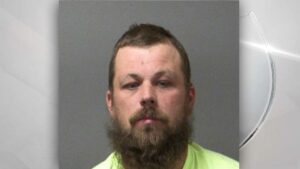 KLAMATH FALLS, Ore. – A man was arrested for allegedly hitting a pedestrian and leaving the scene in Klamath Falls.

Police said at about 10:30 p.m. Saturday, a 48-year-old man was found lying injured on the ground off the roadway in the area of Crater Lake Parkway and Main Street. The man was taken to the hospital for treatment and now in stable condition.

An investigation determined a white Subaru Legacy was traveling southbound on the parkway toward Main Street when it hit the man who was walking on the side of the road. The impact threw them man about 20 yards off the roadway, police said.

According to the Klamath Falls Police Department, it was determined 37-year-old Joshua Michael McMahan was the driver of the Subaru.

On Monday, McMahan was found in the 1700 block of Worden Avenue. He was taken into custody and charged with assault, reckless driving, and hit-and-run.