The Heart Mountain Interpretation Center tells the story of more than 14,000 Japanese-Americans who were taken from their west coast homes and moved to this camp after the attack on Pearl Harbor.

This was Takei’s first trip to Heart Mountain, and he saw a racial slur written on the barracks wall by one of the builders. He was not surprised, and said that kind of racism still exists.

“Same sort of attitude placed us behind these barbed wire fences here in Wyoming,” Takei said. 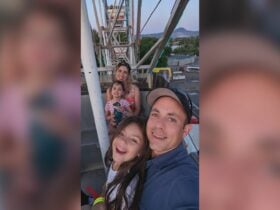