In 2019, a city ordinance was changed, stating any new homes built in high density areas, had to be multi-family housing.

However, after the Almeda Fire, a temporary emergency declaration put a halt to that, allowing residents to rebuild single-family homes, that burned down in the fire.

Now, city council is considering giving residents more time to do that.

“They’re looking at changing our code to allow a longer period of time for folks to be able to rebuild what they had before the fire,” Talent city manager Jordan Rooklyn said. “Right now they have asked staff to research what length of time is appropriate, starting at a minimum of five years from a disaster.”

That code, part of the emergency declaration, was set to expire when the mayor’s state of emergency ends.

The council will vote in March, to decide how long residents will be able to rebuild a ‘like-for-like’ home. 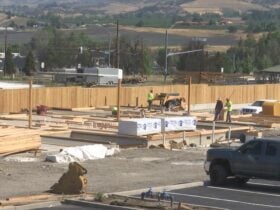