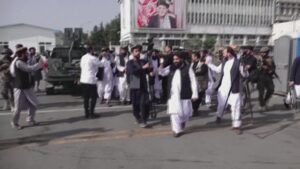 KABUL, Afghanistan (NBC) – The Taliban said Tuesday they want good relations with the U.S. as they took over the Kabul airport after the last American troops left Afghanistan.

Taliban members took what amounted to a victory lap, taking a walking tour of the tarmac and facilities at the airport.

A Taliban spokesman called U.S. involvement in Afghanistan a “reckless act from the beginning” that was motivated by arrogance.

But the spokesman, Zabihullah Mujahid, said the Taliban still want diplomatic relations with the United States.

Taliban fighters took control of the airport before dawn after the final U.S. military transport left just before midnight.

They found wrecked vehicles and aircraft disabled by U.S. troops before they left.

The departure marked the end of a 20-year war that left the Islamist militia stronger than it was in 2001.

America’s longest war took the lives of nearly 2,400 American troops and an estimated 240,000 Afghans, and cost some $2 trillion.