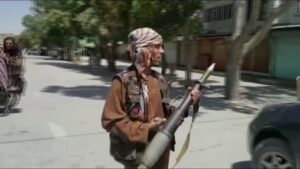 KABUL, Afghanistan (NBC) – Scores of Afghans have fled their homes as Taliban insurgents sweep through the country, taking control of provincial capitals.

There’s been another key strategic victory for the Taliba with fighters taking the city of Ghazni Thursday. It’s about 80 to 90 miles south of the capital Kabul.

It’s a key, strategic city because it lies on a major highway which connects the capital Kabul with Kandahar in the south.

In the meantime, thousands of people continue to flood into Kabul from outside villages and cities where the Taliban has taken control.

Makeshift camps have popped up on the outskirts of the city and in the city center and they continue to fill up with these people who tell harrowing stories of escape end of life under the Taliban.

The UN is saying that a thousand civilians have been killed just in the past month of fighting and, as for peace negotiations in Doha, the State Department says they are going painfully slow.

The Pakistani prime minister said that the Taliban has told him they will not negotiate for peace as long as the current Afghan President Ashraf Ghani remains in power.