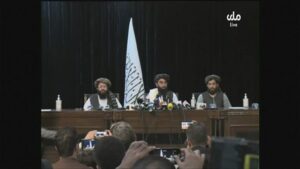 A Taliban spokesman said that the Afghan people “were able to take their freedom and clean their country from the occupation and occupiers.”

In his first news conference, Zabihullah Mujahid, who had been a shadowy figure for years, doubled down on the Taliban’s efforts to convince the world that it has changed from the group that imposed a brutal rule on the country in the 1990s.

“There will be no violence against women, no discrimination against women within the framework of Islamic law,” he continued, adding that the Taliban will “guarantee all their rights within the limits of Islam.”

Pressed on whether Afghan women will be able to go to work, Mujahid said that the rights of women will be determined within the framework of Sharia Law.