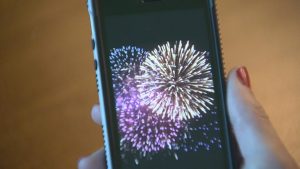 (NBC News) – Fourth of July is the most dangerous time for your smartphone, with drowned phones being the most common complaint.

According to gadget insurance company Asurion, this holiday weekend will bring a spike in claims for cracked screens, lost phones and a 250 percent increase in water damage alone.

Experts say there’s also an increase in the number of people who drop their phones in a lake or river, where they’re unrecoverable. That’s why LifeProof invented a case that gives your phone a life jacket.

If your phone does in fact take a dip with you this weekend, you can prevent further damage by immediately turning it off and removing the case.

“It may sound odd but take vacuum cleaner and actually try to suction the water out,” says Nicole Miller with Asurion.

Another problem for your phone: heat. In direct sunlight, smartphones can overheat in a matter of minutes.

Before your phone gets left behind or lost in the crowd, put a friend or family member’s info on the lock screen.

“We ran a study that showed having an alternate contact on your phone makes it three times more likely you’ll get your phone back,” says Miller.

The summer weather can also drain your battery. Experts suggest reducing the screen brightness and put your phone in airplane mode to make the battery last longer. A portable charger could also come in handy for a long day of celebrating the holiday.