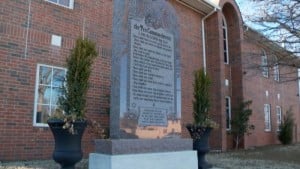 Several bills are being introduced this session aimed at bringing the monument back to the State Capitol grounds.

It currently sits outside the Oklahoma Council of Public Affairs, right down the road from the Capitol, which is why one lawmaker says the fight over the monument is ridiculous.

Other lawmakers say the section of the Oklahoma Constitution that called for the monument’s removal poses a bigger threat.

The ACLU argued that the monument’s placement violated Oklahoma’s Constitution.

In June, the state’s highest court agreed and the monument was removed.