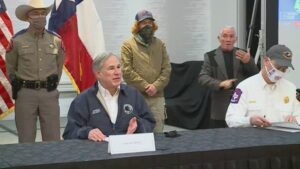 While the initial winter storm starts to move out of the state, the governor said Wednesday that another round of precipitation is expected to hit south Texas over the next 24 hours.

Additionally, Governor Abbott said power has been restored to about 1.2 million households and an order has been issued requiring natural gas producers to sell to power generators in the state.

Governor Abbot said, “I have, earlier today, issued an order effective today through February the 21st, requiring those producers that have been shipping to those locations outside of Texas to instead sell that natural gas to Texas power generators that will also increase the power that’s going to be produced and sent to homes in Texas.”