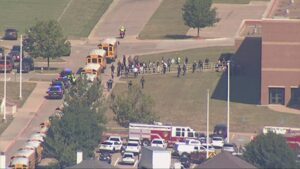 ARLINGTON, Texas (NBC) – At least four people were hurt Wednesday morning during a shooting at a Texas high school.

Arlington police said there was a fight between students in a classroom at the Timberview High School when one of the students pulled out a gun and began firing.

Authorities said out of four victims, one suffered only minor injuries and refused medical treatment. Three others were transported to local hospitals.

After the school was cleared, the students were bussed to another location to be reunited with their parents.

The suspect has been identified by authorities as 18-year-old Timothy George Simpkins who was at large and considered armed and dangerous before he was taken into custody.