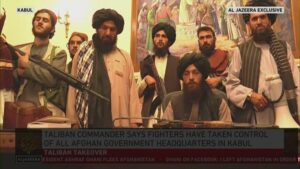 KABUL, Afghanistan (NBC) – Thousands of people are desperately trying to flee Afghanistan now that the Taliban have seized control of almost the entire country.

Afghans are thronging to Kabul’s airport desperate to get on planes and leave the country at any cost. They’re scaling the airport walls Monday morning, rushing in.

There’s no screening, no security checks, just force of numbers. It’s all happening just a few hundred yards from the military side of the Kabul airport where the US is staging an elaborate evacuation of American diplomats from the embassy.

The militants took control of Kabul yesterday. Now, the Taliban are out in full force. They took over the presidential palace, occupied Kabul’s version of the oval office.

The Taliban have set up checkpoints across the Afghan capital.

The Taliban don’t just control Kabul, but the whole country and all the weapons the US bought for the Afghan army.

The militants are much stronger now than 20 years ago when the US drove them from power when they sheltered Osama bin Laden as he plotted 9-11.

Now, the Taliban are back as the US leaves Afghanistan gripped by panic and run by extremists.

The Taliban have been taking potshots at the American planes as they leave and many are drawing comparisons to what’s happening to the American withdrawal from Saigon.