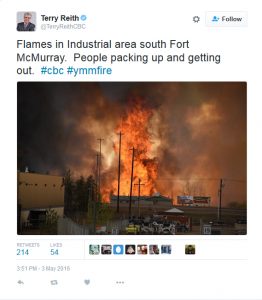 The fire exploded overnight, jumping a highway and a waterway, burning several homes and a trailer park.

Officials say the fire has charred well over 6,400 acres.

Several communities are under a mandatory evacuation, with residents being told not to return home to retrieve pets.

The Chronicle Herald is reporting that as of almost 30,000 people are under a mandatory order to evacuate.

Helicopters and planes are busy dropping water on the fire from above, as firefighters on the ground battle the flames head on.

No word on what sparked the fire.