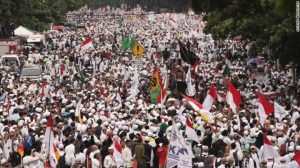 Jakarta, Indonesia (CNN) – Thousands of protesters waving flags are marching through Jakarta demanding the ouster of the city’s governor, who has been accused of blasphemy against Muslims.

Governor Basuki Tjahaja Purnama, commonly known as Ahok, is alleged to have insulted Islam by criticizing his opponents’ use of a Quranic verse in a stump speech.

As many as 18,000 police and military personnel have been deployed for Friday’s protest, and an inner ring of approximately 100 armed military guards are outside the Governor’s residence, CNN Indonesia says.

Local media suggest as many as 50,000 people could take to the streets. There are fears that ISIS, and al-Qaeda, through its Indonesian proxy Jemaah Islamiyah, could seek to ferment violence.

Police have called on demonstrators to exercise their right to protest and freedom of expression in a peaceful manner. Residents have been warned to avoid the protest route and avoid sharing “unclear… provocative and incorrect information” on social media, Police Chief Tito Karnavian said in a statement.

The rally originates at Istiqlal Mosque in Central Jakarta and will end at the Presidential palace. Governments, including the UK and Australia, have urged their citizens in the city to exercise caution.

Conservative Islamist opponents say that Ahok, who is a Christian of Chinese descent, should not administer a Muslim-majority city.

They had previously quoted a verse from the Muslim holy book at a rally, which warns against Muslims allying themselves with non-believers.

Ahok is a key ally of President Joko Widodo and was his deputy when Widodo — also known as Jokowi — was governor of Jakarta. Ahok is now the frontrunner in the 2017 gubernatorial race.

Indonesian President Joko Widodo with Ahok after the latter’s swearing in as governor on November 19, 2014.

Jokowi has called for calm and is seeking support from Prabowo Subianto, his opponent in next year’s presidential election.

Former president Susilo Bambang Yudhoyono, whose son is running against Ahok, made a speech two days ago calling for the governor to be persecuted to placate the Islamist opposition and quell the protests.

There are suggestions that Jokowi’s government isn’t doing enough to buttress against Islamist hardliners.

When video of Ahok speaking out against the Quranic verse appeared online in October, there was widespread outrage from conservative, religious quarters, but at the time, critics say, the government did little to dampen down extremist reaction.

“Pluralist politicians, like President Jokowi, were silent,” Sidney Jones, Jakarta-based director of the Institute for Policy Analysis of Conflict, wrote at the beginning of November.

“No one said, ‘Let’s stop this in it tracks.’ Neither the President nor Vice-President did anything to try to cool tempers.”