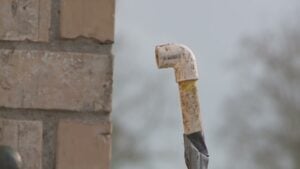 In a press conference on Sunday, Houston Mayor Sylvester Turner said he believes the number of tenants and homeowners struggling is likely in the thousands.

Coaquies Davis says she’s been without water for about 11 days.

“I feel so frustrated. It’s hard on us and our kids. I’ve been keeping them inside because you can’t get too dirty if you can’t bathe,” Davis says.

The water issue at the Villas Del Paseo apartment complex in southwest Houston is too much for some residents.

Jaider Vera suffered significant water damage in her apartment due to a busted pipe and like others at the complex had no running water.

Dozens of residents gathered as part of a demonstration Sunday afternoon alongside Houston Tenants Union to protest the complex’s response.