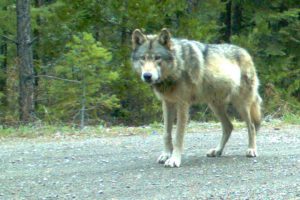 Remote camera photo of OR7 (Rogue Pack) captured on 5/3/2014 in eastern Jackson County on USFS land. Photo courtesy of USFWS.

KLAMATH COUNTY, Ore. – Three calves were killed in a series of wolf attacks in Klamath County over the past week.

The Oregon Department of Fish and Wildlife said a calf on a private pasture in the Wood River Valley was found dead on October 24. The carcass of a separate dead calf had been removed from the same pasture by a rancher prior to the discovery. Yet another calf was partially consumed and likely died on the night of October 21.

Based on the evidence, which included a long trail of blood and wounds consistent with feeding, wildlife officials determined the calves died after being attacked by wolves.

Wolves with the Rogue Pack, which roam between Jackson and Klamath Counties, were recently spotted on a trail camera just 2.5 miles from the pasture on October 23.

According to ODFW, the pack has attacked wolves on this particular property before.

ODFW said though they’re not required, non-lethal measures can be used to reduce livestock depredation.