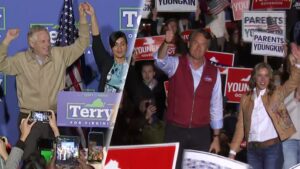 RICHMOND, Va. (NBC) – Polls close Tuesday in the tight governor’s race in Virginia, seen as a possible referendum on the president’s first year in office and a bellwether ahead of the 2022 midterms.

Biden, among the big names who campaigned for McAuliffe, won Virginia by ten points. But his national approval rating has plummeted with his agenda stalled, helping Youngkin surge in the closing days.

But Youngkin is facing headwinds too with Mr. Trump unpopular among key voters.

The former president has endorsed Youngkin but has not campaigned with him and Youngkin didn’t take part in a tele-rally that Trump held on Monday.

Courting critical suburban voters that Trump lost, Youngkin is making education a key issue, trying to capitalize on some parents’ outrage which has spilled over into school board meetings.

Among the issues: critical race theory, a teaching approach that emphasizes the role of racism in history. It is not taught in any Virginia high school and Youngkin is highlighting this controversial comment by McAuliffe in a recent debate, saying, “I don’t think parents should be telling schools what to teach.”

McAuliffe said the comment was taken out of context.