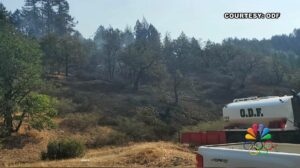 SELMA, Ore.–  The cause of the Redwood Highway Fire, located on Highway 199 MP 23, has been determined to be a catalytic converter from a vehicle driving northeast toward Grants Pass. Six starts were found between milepost 17 and 23, including two smaller fires at mileposts 17 and 19 respectively, and four starts near milepost 23, which grew into the main body of the fire. Additional spot fires flared from there; in all, six acres were burned. It was noticed by investigators that dry fuels were particularly close to the road, likely playing a role in the ignition. If anyone driving in the area at the time of ignition has information, please contact the Grants Pass ODF office at (541) 474-3152.