The ORC delivered the decision Thursday, nearly a week after the Oregon Department of Justice returned an opinion – labeling the Flying Lark as an illegal casino if it was granted the proposed 225 HHR machines.

The application for the Grants Pass business, backed by Dutch Bros co-founder Travis Boersma, was the last green light needed to officially open. Despite commissioners with ORC in favor of the Flying Lark and disapproval of the DOJ opinion, the group unanimously voted to strike down the application. 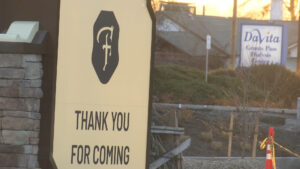 “We will direct staff to work with the Attorney General’s office to ensure a formal notice of intent to deny to TMB Racing LLC.” said ORC chairman Diego Conde.

Boersma shared a statement after the vote, expressing his disappointment in the DOJ opinion that ultimately led to the denial.

“This vote means more than two hundred people will lose their jobs at the end of the month,” Boersma said. “This is heart-wrenching for me. I believe the opinion is wrong and deeply flawed.”

During an ORC meeting last month, Boersma informed Grants Pass Downs’ owner Randy Evers that there would not be a racing season this year if the Flying Lark could not open. In Thursday’s meeting, Boersma said he will fund the spring, summer and fall horse racing season at the Downs out of his own pocket.

“I cannot standby and let an industry close to my heart die. I’m so confident that we will find a path to support horse racing.” said Boersma.

Prior to the vote, Commissioners shared their statement of disapproval that it plans to send to the DOJ’s office. They argue that the now defunct Portland Meadows was allowed to have the same machines for several years under legislature approval, and believes the Flying Lark is no different.

In the opinion however, the DOJ stated, “whether the constitution permitted those machines to be authorized [at the Portland Meadows] was never formally resolved.”

“Casinos have roulette wheels, craps tables, black jack, lottery drawings and the Flying Lark has none of these,” said ORC Commissioner Charles Williamson. 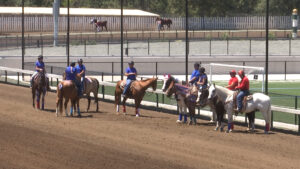 Conde said it’s his understanding that a statute is presumed valid until a court of law and judiciary determine otherwise. Nevertheless, he acknowledged that they needed to follow orders of denying the application for the time being.

The Cow Creek Band of Umpqua Tribe Of Indians, who have continuously been outspoken against private casinos emerging across the state, said it was grateful for the decision. While it supports the idea of economic development, Cow Creek noted that the Flying Lark would be taking away money from the tribal communities.

“This was never an issue about supporting or not supporting live horse racing and there is still believed opportunity to have participation and support on that,” Anna Richter-Taylor, spokesperson for Cow Creek, said during the meeting. “Economic development is absolutely important to the Tribe and all of the other nine federally recognized tribes in the state. They serve and live in the most rural parts of our state, and provide more than 11,000 jobs statewide.”

Richter-Taylor believes the narrative about the tribes being against economic development in southern Oregon and other rural parts of the state is false. She says the outcome of the meeting now opens up a door of opportunities for state agencies to consult with the tribes moving forward.

“If its done properly and early, we can actually get to mutually agreeable resolutions that benefit both governments,” Richter-Taylor said. “So I hope we can all use this as an opportunity to come together and support our rural regions- as well as live horse racing without the gambling aspect with these HHR slot machines.”

Boersma gave his thanks to everyone who have supported the Flying Lark throughout its venture. He asked people to extend the same support to the employees that will soon be laid off.

“This has been a long road. I’m very confident in that path that we’re going to go on and do what’s right,” Boersma said. “I’m not giving up, and I’m going to continue to be a force for God and a force for good in this endeavor.”