JACKSON COUNTY, Ore — A bipartisan group of former and current Jackson County leaders have sent a letter to the Commissioner’s office to address the coronavirus crisis in the County.

Commissioners, Rick Dyer, Colleen Roberts and Dave Dotterrer were previously called out in an Oregonian OP-ED over their response to the pandemic. 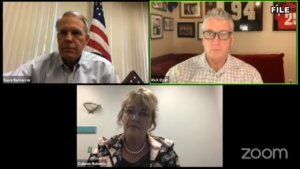 The individuals stated they have not heard much from the Commissioners office throughout the pandemic. Densmore says he’s thankful for their response during certain situations within the past year like coordinating the vaccination clinic at the Expo.

However, Densmore says the Commissioners need to speak out and take action amid the spike in recent coronavirus cases and hospitalizations.

“In the medical community, we reached an extraordinary dangerous level,” Former State Representative Al Densmore told NBC5. “We’re just thinking that the community need to mobilize in major ways and our elected leaders need to help lead us there.”

A copy of the letter was obtained by NBC5 below:

Our county is in the midst of a medical crisis.

As the Delta variant sweeps through all of our communities, our hospitals are being overrun with very sick patients, with needed surgeries and care put on hold.

New inpatients who can no longer be placed in hospital rooms are crammed into hallways and ER exam rooms. Medical staff are burning out. A scenario that is often seen in the developing world is now playing out in the Rogue Valley.

Our County Administration and staff have responded admirably to the challenges, quickly assuming new roles as needed, coordinating mass vaccination clinics at the county Expo, and asking state agencies to provide needed extra resources. Many personnel have gone weeks with no days off.

As a result, many of our citizens still feel that all is well. Britt has had concerts where masking was “recommended” but followed by few. Few masks could be seen at our recent County Fair.

Vaccination clinics have either reduced hours or closed down because of a lack of demand.

We risk businesses closing when their already overworked staff, many unvaccinated, become sick or are placed in quarantine from Covid-19 exposure. We risk future closure of schools when unvaccinated staff or children over 12 become sick, or when younger children become sick from unvaccinated relatives. We risk depleting our medical staffs when burn out causes early retirement, or the seeking of other employment in safer non medical environments.

Disaster can still be averted, although we are running out of time.

We are former and currently elected public officials, Republican, Independent,  and Democrat, who strongly urge the present County Commissioners to take a more active leadership role in conquering Covid-19. Speak strongly and frequently to your constituents about the usefulness of Public Health measures, such as masking. Encourage all the unvaccinated to get their shots, so that they and their family members, friends and fellow workers do not end up on unattended gurneys in hospital hallways or suffer a premature death.

We elected you, our County Commissioners, to oversee our health and well being.. Now is the time for you to step forward and provide the leadership that we need.

We have reached out to the Commissioner’s office for comment and are waiting to hear back.