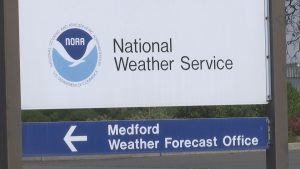 MEDFORD, Ore. — Smoke is clearing up in the Rogue Valley but meteorologist say it won’t last too long.

National Weather Service meteorologist Sven Nelaimischikies has been tracking the smoke closely since nearby wildfires started more than a month ago.

While some days are clearer than others, he says it’s far from being over.

“It’s probably going to be changing the next several days as we get this upper level low that’s going to be spinning around and swinging smoke back into our area,” Nelaimischikies said.

“It determines how active the fire is, how much smoke would be going up into the air at the time the model begins.” “It’s generally been doing a really good job.”

As winds change, clear mornings will cause for celebration, but they won’t last.

The National Weather Service says it may be another month and a half before we can breathe clean air.

Check out the National Weather Service Facebook page for updates.