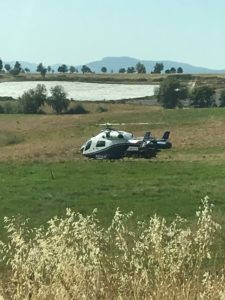 ODF said it grew to 150 acres by 5:45 Thursday evening and is spreading East. The fire is off Worthington road near the Brownsboro highway. Multiple agencies responded to the scene including the Oregon Department of Forestry. According to ODF, it’s also windy in the area, so it’s already called in six helicopters and four air tankers to help contain the flames. A tanker from Redmond, Oregon is on the way to assist with the fire. A U.S. Forest Service VLAT is also dropping 90,000 gallons of water to assist with the flames.

The fire is burning on Bureau of Land Management land and private property. Two dozers are on scene, with two more coming.

Worthington road is closed, but as of now, no evacuations have been ordered. Pacific Power has arrived on the scene.

The area is under a red flag warning. The cause is under investigation. We’ll have continuing coverage of this breaking news throughout the evening. Stay with NBC5 news on Facebook at KOBI-TV/NBC5.