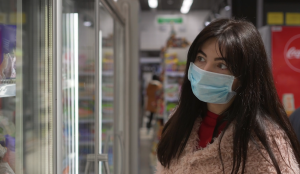 MEDFORD, Ore. – “We must get infection rates down, each one of us can make a difference,” said Oregon Governor Kate Brown.

The ban on indoor gatherings, however, does not apply to businesses including churches and restaurants.

Indoor gatherings is one of the major ways Jackson County Health Officer Dr. Jim Shames says the virus is spreading locally and nationally.

“The Pentecostal church outbreak in the Northeast part of the state, we’re still dealing with repercussions of that and that was many weeks ago.”

Like Governor Brown, Dr. Shames says we need to normalize wearing face masks or shields in our daily lives.

He says particles of the virus drift off into the air when you’re outdoors.

But that’s isn’t the case inside.

“Most of what comes out of your mouth are large mucus particles, they go three to six feet and fall to the ground. Some may float in the air greater distances and stay in the air for longer periods of time,” he said.

Both Governor Brown and Dr. Shames say we’re at a critical time in Oregon’s fight against Covid-19.

“We are beginning to lose control of the disease again, we had to shut down to suppress the virus. It was a great hardship for us but we accomplished it. And we’re kind of squandering what we achieved through that,” said Dr. Shames.

“I obviously don’t want to close down our iconic Oregon businesses, so it’s so important that we’re all in this together and we all work to reduce the transmission of the virus,” said Gov. Brown.

As a reminder, masks are already required in all indoor, public spaces.

The Oregon Health Authority says people with a disability or medical condition can request accommodation from the business if they can’t wear the facial covering or shield.