0
0 Shares
GHAZNI CITY, Afghanistan (CNN) – As the Taliban insists they are taking a less oppressive and gentler approach, CNN’s Clarissa Ward went to Afghanistan to find a very different picture.

This is the image that the Taliban want to project: friendly and pious, bringing peace and security.

On the streets of Ghazni City, Taliban official Mawlavi Mansur Afghan goes from shop to shop, talking to the owners. He asks how the security situation is with the Taliban in charge.

“The situation is good, praise be to God” the man says.

It may well be a performance for our cameras, but it’s telling. The Taliban want to show they have changed.

Ward asked, “When you’re talking to the men and some of them don’t have long beards, are you saying anything to them about their beards? Or, does it matter right now?”

Mawlavi Mansur replied, “We tell the people that this is the Prophet Muhammad’s Sunnah and make them aware what he says, but we don’t want to force the people to do this.”

In another part of the market, the newly resurrected, much-feared religious police are also keen to show they are taking a lighter touch. They gather the shopkeepers to introduce themselves and warn them about the importance of following the Sharia.

“Make sure your women cover themselves,” one Talib tells the crowd. “They should not travel without a close male relative.”

A man stands nearby casually smoking a cigarette, a punishable offence under the previous Taliban regime. But no one says a thing.

Back at their headquarters, at the Ministry for the Propogation of Virtue and Prevention of Vice, the men are still settling in. Up until recently, this was the ministry for women. The man now in charge seems leery of my presence and refuses to meet my eye. He says their mission is to help Afghans embrace Islamic rule.

Clarissa Ward said, “And what do you do if they are not following your interpretation of Sharia law?”

Mawlavi Abdullah Mohammed responded, saying, “We [act] with accordance to Sharia Law. Firstly, we — Promotion of Virtue — inform people about good deeds. We preach to them and deliver the message to them in a nice way; the second time we repeat to them, again; the third time we speak to them slightly harshly.”

If his words sound like talking points, that’s because they are.

As we leave, he hands us a newly issued Taliban booklet, outlining the group’s gentler approach. So he says this book contains the rules for how they should carry out their work. But old habits die hard and back in Kabul, it’s clear not everyone is following the new guidelines.

In a secure location, “Wahid” shows us the ugly marks left behind after he says he was whipped by Taliban fighters. We changed his name for his protection. He tells us three fighters stopped him at a busy traffic circle for wearing western style clothing.  They took him into a guard hut and demanded to see his cell phone.

“I had photos on my phone related to gays, also the clothes I was wearing were a gay style,” Wahid said. “They took me and covered my mouth, two of them held each of my hands and the third hit me. First with a whip and then with a stick.”

When Wahid was asked what reason gave for doing this, he replied: “When they were beating me, they kept saying that I was a gay and I should be killed. They had very scary faces. They were enjoying beating me.”

That lurid brutality was on full display weeks earlier in the western city of Herat, the bloodied bodies of four men were hung in public for all to see. The taliban said they were kidnappers, killed during a raid. On one man’s chest, a grim warning: “Abductors will be punished like this.”

Remarkably, many in the crowd seemed to approve of the Taliban’s medieval display.

Mohammed Mansour said, “People are really happy about this decision because people believe that by doing this, kidnapping can be removed from this province.”

In another grotesque display, two alleged criminals, their faces painted, were humiliated before a jeering crowd — a punishment the Taliban favors for petty thieves.

After the corruption of the former government, the group has seized on a frenzied desire for swift justice. But they are savvy enough to know how it looks to the rest of the world.

Back in Ghazni, our attempts to see the justice system in action are repeatedly stonewalled. We’re told that the Sharia High Court is closed despite the people waiting outside.

Clarissa Ward said, “We’re just trying to show that you have a judicial system.”

As we try to persuade the Taliban to let us in, we see two men head into the court. Our Taliban minder relents and lets us follow them.

In the courtroom, the judge makes it clear it we’re not welcome. “Tell them to stop.” he says.

We are quickly ushered out…

We’ve been trying all day to get into this sharia court. They’re not letting us but they also won’t give us a reason. It may be that what happens behind closed doors here doesn’t fit the Taliban’s new carefully cultivated image and that the movement, born in conflict, is still brutal at its core. 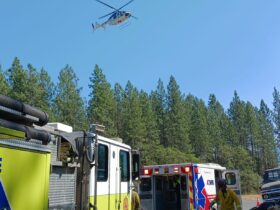