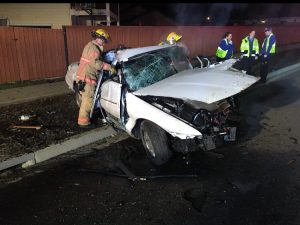 MEDFORD, Ore. — The Medford Police Department along with other emergency personnel responded to a single-vehicle accident early Saturday morning.

19-year-old Oscar Espinoza Jr was driving down Hillcrest Road with four others when he lost control of his vehicle.  The car crashed into a light pole, multiple fences, and trees around 1 a.m.

Two passengers were taken to the hospital with serious, but non-life threatening injuries. Espinoza and two others suffered minor injuries.