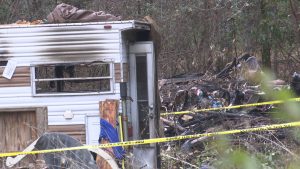 They say a man was shot at a home, early Wednesday morning but aren’t releasing any further details. The Josephine County Major Crime Response Team was activated to conduct the death investigation.

Days later though, Illinois Valley Fire District confirms they responded to the same area as the shooting to put out a trailer on fire. Then just last night, neighbors say someone tried to set the trailer on fire again.

“We definitely need more like neighborhood watch type of thing going on,” said Cave Junction resident Martin White. “But if I had to do that at nighttime around here, I would want to be armed. It’s just out of control here that’s all.”

The fire district declined to comment on any possible connection between the shooting and the fire and referred further questions to Oregon State Police.