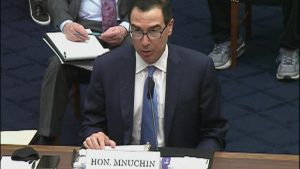 Mnuchin said, “We are in a strong position to recover because the Trump administration worked with Congress to pass legislation on an overwhelmingly bipartisan basis and provide liquidity to workers and markets in record time. In particular, the PPP is keeping tens of millions of employees in their jobs.

Mnuchin called on Congress to pass additional stimulus legislation by the end of the month, allowing especially hard-hit businesses to apply for a second emergency loan. “A next phase of relief should extend the PPP, but on a more targeted basis for smaller companies and those that are especially hard-it, such as restaurants, hotels and other travel hospitality business,” he said.

In addition, Mnuchin said policymakers should consider blanket forgiveness for all smaller businesses that received PPP loans and that there should be funds set aside from the program for minority-owned small businesses.

“We remain committed to working together until every American gets back to work as quickly as possible,” Mnuchin said.