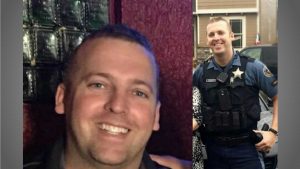 Portland, Ore.- The Oregon State Police trooper shot 12 times at close range on Christmas night is continuing to make great strides in his recovery, according to his brother and a GoFundMe page.

In an update from earlier in the week, it was revealed Nic Cederberg is now walking without the help of others or support of a walker.

“Today Nic took another huge step in his recovery; actually he took twenty six steps, all by himself, with a little help from a lower leg brace. We’ve tried to document a lot of Nic’s new “firsts” and we felt that this was one that needed to be shared,” said the update on the crowdfunding site. “On Saturday he walked (342) feet using a walker during his five physical therapy sessions. And on Thursday he walked for the very first time since the shooting. He was only able to cover about six to ten feet before taking a short break, but it was much needed progress for him and for us.”

The update goes on to explain, at one point, Cederberg thought his right leg was paralyzed.

“He’s working extremely hard to get back to what we would all call normal. In order to get there as quickly as possible he signs up for as much extra PT as the rehab facility will allow, and he always sets the bar higher the next day. Because the only way he said he is willing to go home is if he can walk through the front door on his own with Hayley right beside him.”

Cederberg was shot by a man accused of killing his wife on Christmas. That man was killed in the exchange. In another update on the GoFundMe site, new details of the shooting were revealed.

“As he lay there for a little more than two minutes by himself bleeding, he locked in mentally and found a way to survive,” it said. The update goes on to explain the extent of Cederberg’s injuries.

“Of those twelve rounds that hit him, five were stopped by his bullet proof vest and the other seven struck his flesh. Those bullets hit him in both arms, the torso coming to rest in his lung and abdomen, and two hitting his spinal canal almost paralyzing him. Of the seven that hit him, four were still inside him when he arrived at the hospital.”

Cederberg’s brother revealed one bullet is still lodged in the trooper’s lower spine and will remain there for the rest of his life.