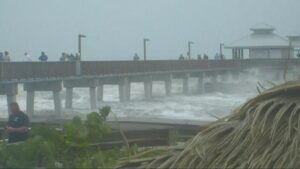 Some people took to the bridge at Fort Myers Beach to watch the rough surf and waves.

Hurricane Eta lost some of its power as it began to hit land on Florida’s Gulf Coast.

In Sanibel, high water hid some docks, leaving post peeking up through the surf.

At its most powerful, Eta’s wind and rain obscured the skyway bridge over Tampa Bay in Hillsborough County.

This was where Eta was expected to be the most damaging.

The Florida Highway Patrol closed the bridge ahead of Eta’s arrival after wind speeds reached 50 miles-per-hour.

In Venice, winds from Eta took a roof off an unoccupied home. No one was injured and the city’s public works has since secured the debris.