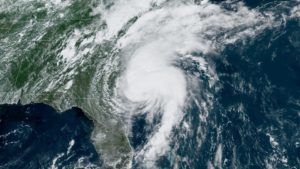 Isaias hit North Carolina as a category one hurricane Monday night, then swiftly traveled north as a tropical storm.

New Jersey Governor Phil Murphy declared a state of emergency at 5 a.m. Tuesday. The Jersey Shore is experiencing gusty winds and torrential rain, which already caused significant damage to buildings, ripping the roofs off and tearing the siding. Nearly 650,000 people lost power in the tri-state area, with most of them being in central and southern New Jersey.

Isaias is expected to continue pushing northeast, traveling near or along the coast of the mid-Atlantic states during the day and across the northeastern united states into southern Canada by Tuesday night.