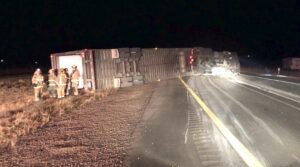 SISKIYOU COUNTY, Calif. – A truck driver was arrested after a rollover crash south of Yreka.

The California Highway Patrol said at about 9:00 p.m. Wednesday, a Freightliner semi-trailer truck driven by 52-year-old Rodney Cavan of Sheriden, Oregon was traveling on Interstate 5 when Cavan lost control of the big rig near Grenada. The truck and trailer ran off the roadway and overturned, blocking both southbound lanes of I-5.