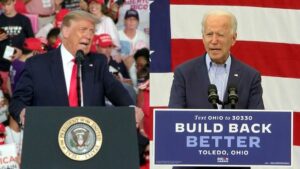 Trump and Biden were originally scheduled to participate in the second presidential debate Thursday night. However, President Trump objected to the virtual format announced by the Commission on Presidential Debates after Trump’s positive coronavirus diagnosis. As a result, the debate was eventually canceled.