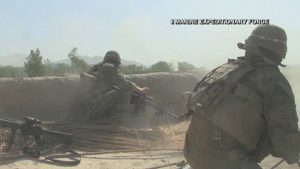 WASHINGTON, D.C. (NBC) – President Trump denied that he was told about conclusions by U.S. intelligence that Russia had offered bounties to militants for killing U.S. troops in Afghanistan.

The New York Times broke the story Friday and that created a firestorm of criticism of the president.

Intelligence officials said the president was briefed about the bounties, which were discussed by administration leaders earlier this year.

Trump tweeted that neither he nor Vice President Pence knew of the information.

The White House National Security Council would not confirm the assessments but said the U.S. receives thousands of intelligence reports daily that are subject to strict scrutiny.

The New York Times reported Monday that intelligence officials became suspicious and began investigating when they discovered large amounts of cash at a Taliban outpost.

The Trump administration was scheduled to brief members of Congress Monday.