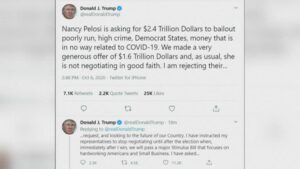 He told his administration’s negotiators to end the coronavirus stimulus talks with Democrats until after the election on November 3rd.

The president blamed Speaker Nancy Pelosi saying she was asking for $2.4 trillion to bail out cities that he calls poorly-run by Democrats and Trump said the money had nothing to do with COVID relief.

He said that his administration offered $1.6 trillion.

Trump said his plan is to offer a major stimulus bill after the election.

Treasure Secretary Mnuchin and Pelosi have been meeting frequently in recent days to try and hammer out a deal.

The president’s tweets did not assure the stock market. The Dow Jones Industrial Average fell by more than 300 points after the announcement.