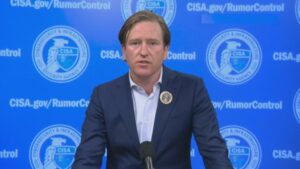 Chris Krebs, the now-former director of the Cybersecurity and Infrastructure Security Agency, had repeatedly said the president’s claims of election fraud are not true.

He had also described the 2020 vote as “the most secure election in American history” and started a “Rumor Control Blog” that debunked baseless claims of fraud, including many promoted by the president.

“I do have confidence that the vote is secure, the count is secure and that the results will be secure,” Krebs said on election day.

After finding out he’d been fired in a tweet from President Trump, Krebs tweeted “Honored to serve – we did it right.”

President-elect Joe Biden’s team says Krebs “should be commended for his service in protecting our elections, not fired for telling the truth.”