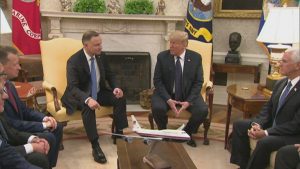 WASHINGTON, D.C. (NBC) – President Trump held his first in-person meeting with a world leader since the coronavirus lockdowns. But the focus quickly turned from the future with Poland’s president to the past with the Russia investigation.

Trump praised a D.C. appeals court decision ordering a judge to drop criminal charges against former National Security Advisor Michael Flynn, who had admitted to lying to federal investigators about his contacts with Russia. But this may not be the end. The judge could ask for a new hearing.

The meeting with Polish President Andrzej Duda comes as the European Union is considering blocking travelers coming in from the U.S. because virus numbers are still too high, with cases surging across the South and West.

Florida, Texas and Arizona are all seeing record numbers.

In Arizona last night, President Trump drew criticism for again using a racially-charged term for the virus to cheers from the crowd of young supporters.

Meanwhile, the Republican bill on police reform that President Trump supports hit a dead end in the Senate. Democrats blocked it, saying it doesn’t go nearly far enough in creating the accountability and transparency that protesters are demanding. Republicans ripped Democrats for not allowing debate.

The House is expected to pass its own sweeping police reform measure Thursday that Senate Republicans say will never reach the president’s desk.