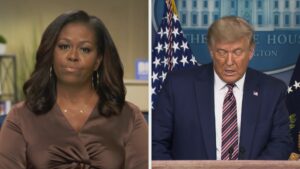 For the men, Barack Obama held the top spot for a dozen years in a row, although Trump and Obama tied in 2019.

The Hill reports the sitting U.S. president has been selected as the most-admired man in 60 out of 74 years.

A random sample of more than 1,000 adults was called in the telephone poll from December 1st to the 17th.