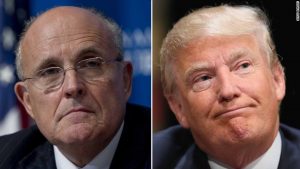 The transition team released a statement Friday saying Giuliani removed himself from consideration for a position last month, a description contradicted by CNN reporting that the New Yorker was told he would not get the secretary of state position this week.

“Rudy Giuliani is an extraordinarily talented and patriotic American. I will always be appreciative of his 24/7 dedication to our campaign after I won the primaries and for his extremely wise counsel,” Trump said in the statement. “He is and continues to be a close personal friend, and as appropriate, I will call upon him for advice and can see an important place for him in the administration at a later date.”

Giuliani will stay on as a “Vice Chairman of the Presidential Transition Team,” the organization said.

Both the statement and in a phone interview Giuliani had with Fox News said the former mayor made the decision himself late last month.

Giuliani was being considered as Trump’s possible pick for secretary of state — one of the most important positions in a president’s cabinet. During Trump’s campaign, Giuliani worked as a top surrogate and adviser to the real estate mogul during his campaign.

That Giuliani will now not serve in Trump’s Administration is the latest sign of a longtime loyalist being shut out and replaced with other conservatives.

Trump loyalists — both high profile surrogates like Giuliani and campaign staffers –who have supported his campaign from the early days are expressing frustration that they are being shut out, complaining that they haven’t been given assurances about administration jobs.

The biggest target of their ire: Reince Priebus, Trump’s incoming White House chief of staff and chairman of the Republican Party.

Trump has hired Priebus and former campaign executive Steve Bannon as “equal partners” — with the former Breitbart chief as a senior adviser. While Bannon is seen as a pick for the grassroots conservative activists, Priebus epitomizes the Republican establishment that many of them railed against. A close friend of House Speaker Paul Ryan, the Wisconsin operative has guided Trump toward hiring proven Republicans for his administration, worrying the early Trump backers that they — and their agenda — will be left out of the mix.