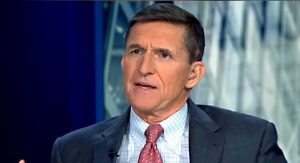 The president tweeted the announcement Wednesday, saying he has granted Flynn a “full pardon,” then later congratulated him and wished him a “fantastic Thanksgiving.”

The former Trump advisor has been under the microscope, pleading guilty twice for lying to the FBI.

The move has been long expected since the president said he was “strongly considering” the pardon.

Despite the guilty pleas, the Justice Department dismissed Flynn’s criminal charges back in May.

The request was then put on hold while a federal judge reviewed the request.