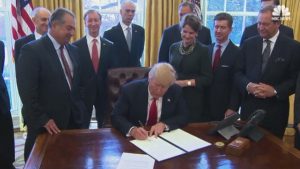 The measure directs federal agencies to make “regulatory reform” task forces that will evaluate federal rules and recommend whether to keep or repeal them. Trump’s administration wants the officials to “focus on eliminating costly and unnecessary regulations,” Reuters reported.

Pledges to roll back regulations and slash taxes for individuals and corporations have helped to drive investor and business executive optimism. Trump also claims his policies will drive job growth, particularly in the Rust Belt regions that sealed his electoral win. He already signed one measure expanding regulatory review, with the goal of revoking two regulations for every new one put forward.

Last month, Trump told a group of business executives that he wanted to cut regulations by 75 percent or “maybe more.” He did not explain how he came to that number.