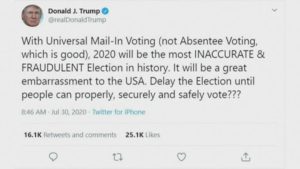 (NBC) Donald Trump floated the idea of postponing Election Day. The president tweeted the suggestion this morning, one he was no power to enforce. He stated, “With Universal Mail-In Voting (not Absentee Voting, which is good), 2020 will be the most INACCURATE & FRAUDULENT Election in history. It will be a great embarrassment to the USA. Delay the Election until people can properly, securely and safely vote???”

That tweet followed one where the president said, “Mail-In Voting is already proving to be a catastrophic disaster. Even testing areas are way off. The Dems talk of foreign influence in voting, but they know that Mail-In Voting is an easy way for foreign countries to enter the race. Even beyond that, there’s no accurate count!”

Only Congress can change the date for the presidential general election.