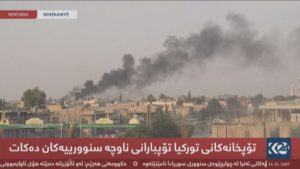 President Recep Tayyip Erdogan announced it on Twitter calling it “Operation Peace Spring” and saying it will neutralize terror threats against Turkey.

President Erdogan’s goal is to drive out Kurdish forces from northeastern Syria, the same forces that for years now have been the main U.S. ally in the fight against ISIS.

Turkey considers them terrorists, with ties to a Kurdish insurgency inside Turkey.

Turkey views the Syrian Kurdish fighting force, the YPG, as being one and the same as the Kurdish separatist group the PKK. They are very close organizations and Turkey says that the YPG poses an existential threat as long as they remain along its border.

But this military action is not going to be without grave consequences to the civilian population that lives along that area and perhaps even greater ones given that it is the Syrian Kurds who right now are responsible for guarding the camps as well as the prisons that house tens of thousands of ISIS fighters as well as their families.

Turkey is intending, it says, on then moving Syrian refugees — Arab Syrian refugees who make up some of the 2 to 3 million who are currently residing in Turkey — into this “safe” zone.

Concerns are rising as to whether or not Turkey is also undertaking a demographic change in this area, one that will potentially create a population along its border that will be friendlier to it. And of course, of greater concern to the civilian population in Syria in this area, is whether or not there are once again simply being used as collateral damage in a bigger political game.