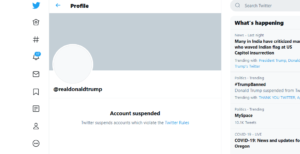 It accuses him of sparking the Capitol riot and says he could use the platform to incite further violence.

Over the last four years, Twitter has largely given Trump latitude, saying people have a right to hear from public officials.

But, it temporarily locked his account Wednesday and sent a warning that further rule violations would lead to suspension.

One mentions his support for “75-million great American patriots” and the other says he’s skipping president-elect Biden’s inauguration.

As for the handle “@realdonaldtrump,” the last post from it was about Biden taking office.