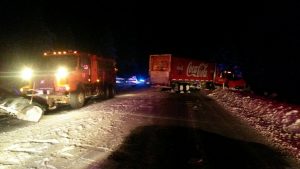 Police say a Chevrolet Avalanche was driving southbound on Highway 97 when the driver lost control and crossed into the northbound lane around 5 p.m on Friday.

The Chevrolet was sliding sideways when a tractor towing a trailer struck it.

The driver of the Chevrolet,  57-year-old Lola Maye Stanphill was pronounced dead at the scene.

The driver of the truck, 54-year-old Philip J Clark was not injured.

Police believe snow and icy road conditions played a role in the crash.

Highway 97 was closed for investigation, but is now reopen.

We’ll have more information as it becomes available.