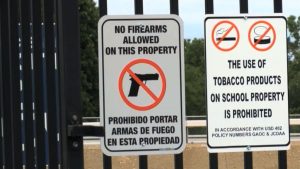 “I was just standing next to my old basketball coach and hear like a really loud firework sound, my coach had a hole in his shorts, he was standing right next to me,” said witness Garrett Tipton.

Police say the 37-year-old man had the small semi-automatic gun tucked in his sock.

When he went to adjust it, police say, the gun went off, striking him in the foot. The bullet ricocheted before hitting a 28-year old woman in the leg.

She was taken to Wesley Medical Center in serious condition.